Everybody’s Looking for Something 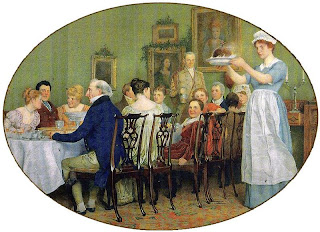 In this dream I have a behind-the-scenes look at an elaborate stage production. The Mistress of Ceremonies wants the costume designer to make her an “original” gown, but she wants him to copy a fashion she saw on Project Runway. It is an Erte style, Art Deco black dress, with a bandeau bra top, straps leading to a halter neck and choker, long crepe skirt, bare midriff with fabric strips connecting the top and skirt, and long black gloves with vertical slits allowing the skin to show through.

The final result is chic and dramatic, but she doesn’t want the audience to know she has stolen someone else’s design. She asks me to find her makeup tray, so I look inside a 1920’s style vanity, but it is filled only with cassette tapes and a recorder. I accidentally start the recorder playing and can’t shut it off. The song is a 1920’s tune that apparently accompanied the model on Project Runway when she showed the original design. The MC is furious because she thinks the audience will make the connection to her gown’s true origins.

The dream then fast forwards to the final scene of the play, which is set like the Victorian drawing room in the Nutcracker ballet, ready for a lavish Christmas celebration. After the characters parade around and exchange not-so-pleasantries, the MC announces that the world is about to end, and this is their last chance to hold onto what is most important to them.

The final tableau shows each character worshipping their god, pledging their allegiance to what they hold most dear. A middle-aged woman who has parlayed her physical charms into a wealthy but loveless marriage and equally empty affairs draws close to her reflection in a full-length mirror. Her husband reaches lustfully for the young maid, who has her hands in the silver drawer.

The learned professor gets on one knee in a courtly pose and extends his arms to the bookshelf, as if he could encompass all the science, poetry, and philosophy contained in its volumes. While the athlete contorts his muscular frame into a manly expression of physical prowess, the obese glutton stuffs his face at the buffet, and the addict snorts his stash of cocaine. The children grab as many presents as they can, shoving each other aside, and run to the fireplace, peering up into the chimney and hoping they can get more from Santa.

A priest, who was invited to pray before the meal, piously holds his rosary in one hand and his censer in the other, looking upward to heaven yet hoping a crowd will kneel at his feet. Meanwhile, a beggar out in the cold, nearing the threshold in hopes of a few scraps discarded from the sumptuous dinner, flings himself prostrate on the ground and begs God for mercy and forgiveness.

I awoke with the realization that only the beggar, who realized he was a sinner in need of a Savior, would spend eternity in Heaven with Jesus Christ, and that the idol worshippers would all be cast into the lake of fire (Ephesians 5:5; Revelation 20:15;21:8)..

The pattern of the black dress reminded me of a “map” Todd Friel drew on an episode of the Wretched TV show, with the skirt representing the lake of fire, the top representing the “Devil’s Pond,” and the slits on the gloves, straps, and fabric pieces representing the tributaries feeding into the pond and ultimately into the lake of fire. He explained that Satan lures souls to follow the current into these various tributaries and rivers of worldly thought leading to destruction, including sexual immorality, substance abuse, humanism, atheism, pagan worship, and works-based religions.

In the dream, the dress design was stolen but masqueraded as an original creation. Satan is the great deceiver and the father of all lies (John 8:44), and in his desire to be God he imitates Him, from the unholy trinity to his distortion of God’s Word, seen first in the Garden of Eden (Genesis 3:1-5) and not ending permanently until he is cast into the lake of fire (Revelation 20:10) . But all evil deeds are recorded and made known (Mark 4:22; Luke 8:17; (Ephesians 5:11-13), and those who rejected God and His Son will answer to Christ when He reads their sins from the books He keeps (Revelation 20:12).

Except for the beggar, all of the characters in this dream staked their eternal destiny on something other than faith in the death, burial and resurrection of Jesus Christ as the only way to Heaven (1 Corinthians 15:1-4; John 14:6). The “Christmas” celebration failed to honor Christ, Who came in the flesh (John 1:14) to reconcile sinful man to Holy God (2 Corinthians 5:18-19; Hebrews 2:17). Instead, it glorified the false gods of this world as the celebrants stumbled into Satan’s traps of the lust of the flesh, the lust of the eyes, and the pride of life (1 John 2:16).

Falling prey to the lust of the flesh were the drug abuser and the glutton. The middle-aged beauty succumbed to the lust of the eyes as well as the lust of the flesh, worshipping her own image while seeking confirmation of her desirability in meaningless sexual encounters. Her husband, who should have been the spiritual leader of the household (Ephesians 5:23-26), was no better. Small wonder that they had neglected their parental responsibilities of spiritual guidance, and that their greedy children were following in their parents’ footsteps !

Also attempting to satisfy the lust of the eyes and the pride of life was the maid, as those who crave wealth do so for the lovely things it buys as well as for the power linked to prestige and worldly success (1 Timothy 6:10). And the athlete placed his faith in his physical strength and accomplishments to win the respect of others (1 Corinthians 9:25). But we are saved by God’s grace alone, and not by our own works, no matter how impressive (Ephesians 2:8-9).

Thinking himself to be wise by embracing all the world’s writings, the professor proved himself to be a fool, as the world’s “wisdom” is no match for God’s Word. Trusting in evolution and humanism as absolute truth deceives men from realizing their own sinful nature and leads them to deny God’s very existence (Romans 1:21-25; Psalm 14:1; 53:1).

One would hope that the priest would be a better role model than the other characters in this morality play, but he too counted on his own works and self-righteousness (Luke 18:10-14) Vain repetitions in prayer, without speaking to God as a child approaches their Father (Matthew 6:7-9) for wisdom, advice, and loving guidance and provision, are meaningless works. Even worse, he pretended to be worshipping God while seeking only admiration and reverence from others (Matthew 6:1-5), which made him a false prophet and teacher whose only god was himself ((Matthew 7:15;:2 Peter 2:1).

Far outnumbered by those who tried to enter eternity by the broad gate leading to destruction was the beggar. Sadly, those who have been born again (John 3:3-8) and accept Jesus Christ as the only Way, Truth and Life (John 14:6) are in the minority, and even Jesus said that His way is narrow (Matthew 7:13-14). May we renounce our false gods, repent of our sins, and trust in Him to lead us to eternal life!

Everyone is looking for something, but even in this life, nothing satisfies other than a personal relationship with Jesus Christ. Only He brings joy, peace and abundant life here and now, and unimaginable, everlasting joy and peace in His presence in Heaven. May we tell all we encounter of His goodness and of the satisfaction only He can give!

Dear Laurie,
Your dream is indeed such a sad reality of normal living, especially by unbelievers. The trouble is, we all have one god or another, no matter what it might be, we give to it our devotion.
For example, I love to travel. There are many of my blogs referring to travel. Is travel my god? Or do I see it as a wonderful gift sent from the True God out of grace alone?
There was a time that "emptying myself" until I was no more than a mere street beggar was the way to eternal life. It took a long time for me to realise that this is just another form of works-based salvation.
I read about the wonderful conversion of the Ethiopian eunuch (Acts 8:26-40), of Cornelius (Acts 10) and even the Philippian jailer (Acts 16:16-40). These men weren't beggars. But when the word from God was delivered to them and they believed, they were saved.
Oh, how wonderful the grace of God is! His willingness to save regardless of background reveals the love He has for us all.
Wishing you and Richard the best of God's blessings.

Dear Frank,
I agree -- God has given us richly all things to enjoy, whether it be travel, dancing, singing, good food, comfortable surroundings, and especially loving relationships. As long as we keep our priorities straight, give Him the pre-eminence in all things, and realize that every good and perfect gift comes from above, we can enjoy these from the proper perspective rather than idolizing them. But it is equally true that any of these gifts can become an idol if we value them above our relationship with God.
Praise God for salvation by faith, not works! Thanks as always for your Scripturally based comment. May God bless you and Alex,
Laurie