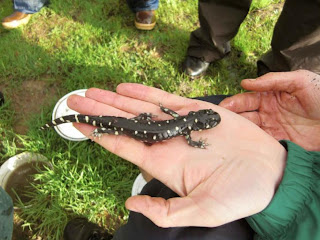 Our ballroom had major drama over the last few days. Ladies would run out of the restroom screaming, and even gentlemen would gasp and lose their composure while leading a dance move. The source of all this commotion was a small lizard who had apparently sneaked in under the door and refused to leave, appearing unexpectedly at the most inopportune times.

Such lizards are common in Florida, where the sunlight, heat, humidity, vegetation and insects offer them an ideal environment. They blend well into their outdoor surroundings, where their intricately patterned colorations and interesting behaviors usually cause us to admire them as an example of God’s perfect and creative design (Genesis 1:24-25). But within the ballroom, this tiny intruder took on monstrous proportions and was described as “that humongous, nasty creature!”

Richard, my husband, opened the door and tried to show him the way, and got behind him and shooed him toward the threshold. But the little rascal obstinately stood his ground in the corner, then fled even further into the ballroom corridors. Richard extended his hand to gently scoop him up and out the door, but he scurried away.

Finally Richard dropped an empty wastebasket upside down over the culprit so that he would be safely contained inside. His plan was to slide the wastebasket to the door, then to safely release the lizard outdoors where he could find the sunlight, water, and food he so desperately needed. But that rebellious lizard flung himself against the walls of the basket and even tried to escape through the bottom. In the resulting struggle, a tiny piece of his tail broke off, and when Richard finally brought him into the sunlight, the lizard seemed dazed and exhausted by his journey, lying peacefully in his hand for a moment before leaping to freedom.

“It would have been a lot easier on him if he hadn’t fought me the whole way,” Richard said.

It made me wonder how many times God says the same thing about us. Like Lot (Genesis 13:12-13;19) and Samson (Judges 14-16), we leave the provision of His presence to stray into places and situations where we don’t belong. Outside His will, we no longer fit harmoniously into the order He has designed for us as members of His body (Romans 12: 4-5; 1 Corinthians 12), but instead we disrupt the peace and fellowship of others. We cut ourselves off from His life-giving love, safety, and blessings (Philippians 4:19), and strike out on our own as if we could supply our own needs once separated from His nourishing care (John 15:5).

But thankfully, God loves us too much to leave us in our desperate predicament (Isaiah 54:7-10; Luke 15:4-6). When we were His enemies, rebelling against His authority and even against acknowledging His existence, He pursued us to get our attention (Romans 5:8-10; James 4:4) and to show us His love (1 John 4:19).

Saul of Tarsus was arguably the most zealous enemy of Christ, for he persecuted, imprisoned and even killed Christians (Acts 7: 57-Acts 8:1-3). Yet Christ appeared to Him on the road to Damascus, and Saul became Paul, entrusted by Christ with the mission of spreading the Gospel to the Gentiles and writing most of the New Testament (Acts 9:1-2).

Once we trust Christ as Savior and place our faith in His death, burial and resurrection as the only way to Heaven (1 Corinthians 15), He will not let us stray far from His will without intervening to call us back to Himself.

The good life the lizard was seeking lay just outside the ballroom door, yet in his ignorance and confusion he ran further away from it, fighting Richard’s rescue attempts with every fiber of his being. When the lizard strayed from his outdoor home into the ballroom, he was so far out of his element that he was viewed as a nuisance and a menace, rather than as one of God’s awesome creatures playing his part in the harmony of nature. When we are out of God’s will, we cannot glorify Him because others see our sin nature, and not His light shining through us (Romans 8:5-9).

I felt sorry for the lizard as my husband slid him to safety in the wastebasket, because he couldn’t see where he was or where he was going and had no idea of his destination or fate. God made us in His own image (Genesis 1:27) with the ability to love, trust, and obey Him, yet sometimes we lack faith (Hebrews 11:6). We panic and fight back like the lizard, which only makes our situation worse.

When we can’t see Him at work and can’t hear His voice, we may think that He has abandoned us or that He no longer cares enough to see us safely home.

Yet He will never leave us nor forsake us (Hebrews 13:5). Once we are His children and joint heirs with Christ (Romans 8:17), nothing can separate us from His love (Romans 8:35), and nothing can pluck us out of the double grip of Jesus and the Father (John 10:28). We cannot go where His love cannot rescue us (Psalm 139:1-12), and if we take even the smallest step on the journey home to Him, He will run to us with open arms (Luke 15:20).

Even if we can’t understand how He will see us through our distress, we should trust in His love and in His ability to bring about His perfect will for our lives (Romans 8:28). Don’t fight Him – trust Him!

Psalm 19:13: Keep back Thy servant also from presumptuous sins.


“It is as if [David] said, ‘Keep me back, or I shall rush headlong over the precipice of sin.’ Our evil nature, like an ill-tempered horse, is apt to run away. May the grace of God put the bridle upon it, and hold it in, that it rush not into mischief. What might not the best of us do if it were not for the checks which the Lord sets upon us both in providence and in grace!
C. H. Spurgeon, Evening by Evening, March 16

The story of the lizard is a good one - reminds me when there was a spider in the house. Some members of the family ran away from its presence. But luckily I did not inherit the fear, but when I tried to grab the intruder, it too would take flight, as it was more frightened of us than we were of it.
A very good post.

Thanks, Frank, for your kind words and comment!
Blessings,
Laurie

The lizard on the photo is the salamander - this animal is also met in Poland, especially in mountains, but here it is under the government and ecological protection. I think it is also good comparison between Christian and salamander - we are rare in this sinful world, but God protect us against destroying. Greetings and blessings for You! :)

Thanks, Zim! Praise God that He is faithful to protect His remnant!
God bless you and your ministry,
Laurie

Interesting comparison. People get confused just like that lizard and don't know which way to turn. They need to be shown the way. Jesus came to make a way and show us the way. Otherwise we would all be just as confused as that lizard was.
Blessings,
Charlotte

Thanks for your comment, Charlotte! Praise God that Jesus is the way, the truth and the life!
Love in Him,
Laurie

Now if it was a snake, I'd be running and screaming, BUT when we lived in Uganda we loved having lizards and geckos around, b/c they ate the roaches and other bugs. In fact, since we've been in Omaha, we've wished we could have geckos again in our house. Funny how life changes from place to place, isn't it?

oh boy. Love that little lizard in any case. Cute :)

So true, caryjo! Even snakes can be useful (outdoors!) to keep the rodents in check. God created everything and all of us for His purpose -- may we all fulfill His perfect plan!
Thanks so much for your comment, and God bless!
Laurie

Besides lack of understanding, I think maybe we fight God so much because of lack of trust. However, the more we come to trust the Lord, the easier it is to fully submit to Him (and visa versa!!) Blessings, Joan

Great Illustration and post, Laurie. So many spend their lives fighting to stay where they are, not realizing the danger and disruption they are causing.

Thanks, dfish! Outside His will is the most dangerous place anyone can be, causing not only their own destruction but disrupting others in their walk.
God bless,
Laurie

I love this idea: that we are beautiful and safe as long as we stay within God's will.

Amen, Shanda! Being in the center of His perfect will is not only the safest place for us, but the only place that allows us to reach our true potential.
Love in Him,
Laurie

When we stray from God's will, we too are out of our element. I like what Richard said, "It would have been a lot easier on him if he hadn’t fought me the whole way,” So many of us fight against God's will, but when we allow Him to lead and direct we can dance more smoothly!
Thank you for sharing at at "Tell me a Story," my new Blog Party: http://letmetelluastory.blogspot.com/

What a great lesson your little ballroom guest inspired! So thankful our good God never leaves or forsakes me. Even when I struggle against Him. Lovely.

Nicely put, A Joyful Noise! I think your comment is a confirmation for the next blog post I am considering. Stay tuned!
God bless,
Laurie

Thanks, Laura, for the kind words and encouragement! Praise God that He is always with us, even when we turn our back on Him.
Blessings,
Laurie

Oh, this is so, so true! How often we fight, when it would be so much better to simply give in to His perfect way. Thank you for sharing this!

Such a good analogy. Thanks for sharing such a good post. I have resembled that lizard a time or two. :)

Hi Mary! Thanks so much for visiting & commenting! Letting go and letting God really is a better way!
Love in Him,
Laurie

I've been like that lizard, struggling and fighting rather than allowing God to work in me.

Thanks, Joan! I think we've all had our moments like that lizard -- I'll be describing one of mine on my next blog post!
God bless,
Laurie

Thanks, Audra Marie! I think we've all been there with that lizard...
God bless!
Laurie