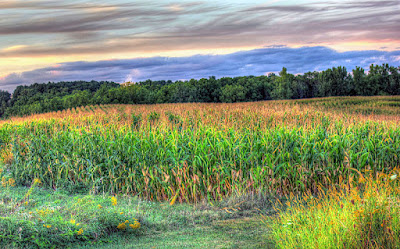 As readers of this blog  may have gathered, I sometimes have detailed and complex dreams. One morning, however, I awoke remembering not an intricate plot, but a single image.

I stood before a single corn plant and was struck by its beauty and majesty as it grew purposefully toward Heaven. Its emerald leaves were lined with countless tiny grooves, sparkling with dew like multifaceted crystals, reflecting prisms of light. Pearly white, and pale and bright gold, kernels peeked through the parted husks sheathing the pristine ear of corn. At the top of the ear, flaxen strands of corn silk shone in the sun like a maiden’s blonde tresses.

Jesus explains that we can’t see or understand how a kernel of corn dies in the soil to transform into a fully ripe ear of corn on the stalk, each kernel capable of repeating the whole process (Mark 4:26-29). Similarly, we can’t understand the mystery of how His death resulted in the eternal life of all who repent of their sins and trust in His death, burial and resurrection as the only way to Heaven (1 Corinthians 15:1-4). Part of that mystery, however, is that we must die to our sin nature and to worldly cares (1 Corinthians 15:31) so that we can live forever as a new creation (2 Corinthians 5:17), indwelled by the Holy Spirit to reach many other souls for Him. 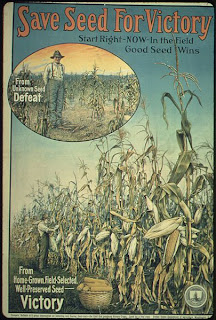 Hi Laurie, you have lovely, inspirational dreams, and I love the analogy of the corn. Everything that God has created has a purpose, and when we die to ourselves our new creation in Jesus can reap a wonderful harvest through spreading the gospel.

Hi Brenda,
Thank you for your encouraging comment. May we die daily to the flesh and reap the bountiful harvest of the Spirit. God bless you,
Laurie

Dear Laurie,
Unfortunately, I have not seen any cornfields here in the UK. Maybe our climate isn't suitable. But overseas, I have seen plenty, especially in France and Italy.
As such, your dream reminds me of these past trips.
As you say, all seeds must be buried in the soil before they can germinate, take root and sprout. Could this be an analogy of burying the corpse in readiness for the resurrection?
Perhaps the caterpillar, its pupation, and then emerging as a butterfly or moth is another of the same analogy.
Wishing you and Richard God's blessings.

Dear Frank,
I believe corn needs more sun, and less humidity, than are available in the UK. Thank you for the analogies comparing the buried seeds, the buried corpse, and the caterpillar entombed in the chrysalis before new life and a new creation can occur.
May God richly bless you and Alex,
Laurie

Thanks, Rajani! God bless you.
Laurie

inspiring dream....
Thank you for sharing.

# Have a wonderful day

Thank you, Tanza, for your visit and comment! Have a wonderful weekend and God bless!
Laurie