“Baba” and Ruth: From Bitterness to Trust 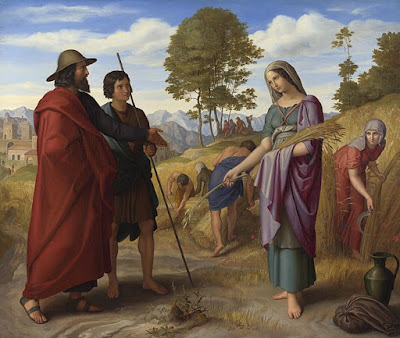 As we saw in our first post of the story of Ruth, and of some parallels in that story to the life of my grandmother “Baba,” trials often bring us to an important crossroads: rebel against God, or follow Him. When Ruth’s husband, and that of her sister Orpah and mother-in-law Naomi, died in the pagan nation of Moab, Ruth chose to follow Naomi back to her home in Bethlehem, to be faithful not only to Naomi, but also to the true Jehovah God they both served (Ruth 1:1-18).

After Baba’s husband and nine of her ten children died in Nova Scotia, they did not return to Baba’s place of origin in the Ukraine, but instead moved to a Russian community in Manhattan’s lower East Side. Both Ruth and Baba had to trust God despite additional trials and the need for hard work.

Once Naomi and Ruth arrived in Bethlehem, Naomi’s family was happy to see her, but she expressed her bitterness that God had dealt so harshly with her, taking the lives of her husband and sons (Ruth 1:19-21). Ruth would have to become the breadwinner for both of them by hard work in the fields of Boaz, Naomi’s relative and therefore Ruth’s nearest kinsman by marriage (Ruth 2:1-3).

Baba had never learned to read or write, and she spoke only a few halting words of English, so her job opportunities were extremely limited. Still, she had to provide for herself and for my mother, and she was not afraid of hard work. She found a job at a local bakery, where she went to work at 5:30 AM six days a week. But the job had its perks, including bringing home cookies and pastries that were left over at the end of the day!

Although Baba could have justifiably complained about her hard life, I believe she had the peace that passes all understanding (Philippians 4:7) and joy in her salvation (Psalm 35:9). Like her husband who had gone home to Jesus before her, I believe that Baba had trusted in the death, burial and resurrection of Jesus Christ (1 Corinthians 15:1-4) as the only Way to Heaven (John 14:6).

God’s plan for Ruth, predestined since before the beginning of time (Ephesians 1:5,11), was a plan of peace and not of evil (Jeremiah 29:11). The blessing He gave her of leading her to the fields of Boaz was only the beginning of His reward for her faithfulness. Boaz admired Ruth’s dedication and faith, offering her the opportunity to glean exclusively in his fields, feeding her as she worked, and arranging for his men to leave handfuls of barley behind them as they worked his fields, so that Ruth could gather extra to feed herself and Naomi (Ruth 2:1-18).

Boaz assured Ruth, “The Lord recompense thy work, and a full reward be given thee of the Lord God of Israel, under whose wings thou art come to trust.” (v. 12)

Boaz, who is an Old Testament foreshadowing of Jesus Christ, showed abundant grace and mercy to Ruth even though she was a stranger to his people and she had come from a pagan nation worshipping false gods. Thankfully, God has opened the plan of salvation to all peoples, to whosoever will believe in His Son (John 3:16; Romans 1:16; 10:12) and be saved by His grace (Ephesians 2:7-10).

Baba’s new church community in New York supported her in love and prayer and helped to bear her burdens (Galatians 6:2), for they appreciated her diligence, character, and faithfulness to her fellow believers. She became a sister in the church and contributed her time and service to its ministry. Through the church, she met a well-to-do and kindly older man who hired her for janitorial work in his office building and arranged for her to be enrolled in Social Security.

It is amazing how God brings just the right people into our lives at just the right time, to accomplish His purpose for us. God will always reward faithfulness, obedience, and trust in Him by providing for our physical needs (Psalm 37:25; Matthew 6:25-34) and blessing us spiritually beyond measure!

No matter what hardships we may endure in this life, God’s children can rejoice always (Philippians 4:4), knowing that we will spend eternity in Heaven with Jesus and our loved ones in Him, enjoying the Heavenly City (Hebrews 11:16; 12:22), our glorified bodies (1 Corinthians 15:35-58), and even our own mansions He has specially prepared for us (John 14:2-3). You can’t outgive God, as both Ruth and Baba discovered, and as we shall explore further in our next post!

Dear Laurie,
This is an amazing blog! I could see the parallelism between your grandmother and that of Ruth.
As the Bible says, the Lord is the same yesterday, today and forever (Hebrews 13:8).
So no surprise that your grandmother's story runs parallel with those in the Bible. God bless.

Dear Frank,
Thanks so much for your comment and encouragement. It is amazing, and a testimony to God's immutability, that we can see parallels between lives of Bible characters and those we know personally, and realize that His Word is relevant through all time.
God bless,
Laurie

Hi Laurie,
I can really identify with what you have written today, especially where you say:-'It is amazing how God brings just the right people into our lives at just the right time, to accomplish His purpose for us. God will always reward faithfulness, obedience, and trust in Him by providing for our physical needs'
I know the right people are in my life at this moment in time regarding my walk with the Lord, and as I am going through a trial at this moment also I have been encouraged to endure and be strengthened by the Word spoken to me within this trial.

As I Corinthians 10:6, and 11 tells us the Old Testament stories are given to us for examples so that we can learn from them. Praise God he still works in the same mighty ways today. Great post, Laurie.

Hi Brenda,
Praise the Lord for His abundant provision, including bringing the right people to us to help bear our burdens, inspire and instruct us. Love and prayers for His will to be done in the trial you are experiencing and for you to be strengthened, comforted and delivered.
Thanks as always for your comment and God bless,
Laurie

Hi Donald,
Praise God for His Word to guide, instruct and encourage us, including true stories that are not sugar coated but portray individuals as they really were. We can therefore better identify with them and trust that God will prove Himself faithful in our lives as He did in theirs. Thanks for your comment and God bless,
Laurie

Wow, what a wonderful Baba! ❤️

Amen, Susan! I am blessed that she was so involved in raising me. Thanks for your comment and God bless,
Laurie

I'm glad I got a moment to check out the second installment of this series Laurie. Thanks for sharing about your grandmother. Thanks for all these encouraging posts of yours. God bless and keep you Laurie. :-)