The Distracted Ruler Loses Focus, Faithfulness, and Fear of the Lord 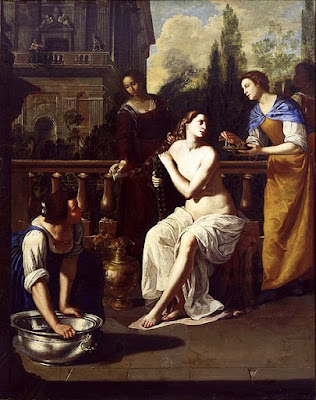 King David displayed wisdom, knowledge, and understanding, for he was a Godly man of faith, a wise father to Solomon, and a good ruler to God’s people. Yet the Bible shows us that even such a man is not immune to distraction, temptation and ultimately sin (Romans 3:23). One of the proofs that Scripture is the inspired Word of God (2 Timothy 3:16) is that it does not sugar coat the truth, portraying its heroes as picture perfect, but rather shows us man’s weaknesses and failures as well as his virtues.

King David had just scored a great victory over Syria (2 Samuel 10) and was enjoying a well-deserved respite in his home at Jerusalem. Certainly there is nothing wrong in rest (Matthew 11:2; Psalm 127:2), renewal (Isaiah 40:31), and refreshment (Exodus 23:12) after triumph in a hard battle, whether it be physical, spiritual, or political warfare. God Himself rested after His work in the six days of creation (Genesis 2:2-3).

But overindulgence in rest (Proverbs 6:9-11) can become distraction (Hebrews 12:1) from God’s purpose for our life, leading to idleness (Ecclesiastes 10:18; Ezekiel 16:49), and slothfulness (Proverbs 19:15). In David’s case, his year of rest should have been over, for it was time for the warring kings to return to battle, and for him to lead his troops. Instead, he sent his commander Joab, his servants, and all of Israel to destroy the children of Ammon and besiege Rabbah, while he lingered behind in Jerusalem (2 Samuel 11:1).

This sin of idleness soon put him in a position where he could be tempted by the lust of the eyes, which if uncontrolled soon leads to the lust of the flesh and pride of life (1 John 2:16). Pride is evident in David’s belief that fulfilling his desires was more important than not hurting others or disobeying God.

When born-again believers, meaning those who are saved by our faith in the death, burial and resurrection of Jesus Christ (1 Corinthians 15:1-4) as the only Way to Heaven (John 14:6), are not doing God’s work, we get restless. The new man within us longs to yield to the Holy Spirit, to serve God, and to be in the center of His perfect will (1 Corinthians 2:9-16).

Yet our sin nature rebels against God (Romans 7:7-25) and tries to convince us that we deserve time off, or that we should be directing our efforts toward improving our position in the world, or just “following our heart.” All of these are euphemisms for sin and lies from the devil (John 8:44; 1 John 2:22), causing us to grieve the Spirit (Ephesians 4:30).

So David, who should have been fulfilling God’s plan for him as faithful servant, benevolent ruler, and heroic warrior, instead lost his focus, lingered in temptation, and fell into sin. One evening he was so restless that he arose from bed, walked out on his roof to enjoy the cool breeze, and spotted a beautiful woman bathing (2 Samuel 11:2).

Billy Graham once wrote that if a young man notices a beautiful woman who crosses his path, that is only temptation, but if he stares at her, that is sin. God always provides a way out of temptation if we choose it (1 Corinthians 10:13). David could simply have averted his eyes, walked back inside, and prayed to God to create a clean heart within him (Psalm 51:10).

Instead, he allowed his temptation to grow into lust (a sin in thought) which soon gave way to sinful acts toward the family of Bathsheba, described as the daughter of Eliam, the wife of Uriah the Hittite. He discovered who she was, sent messengers to bring her to him, and had sexual relations with her (2 Samuel 11:3-4).

Jesus said that if we even look at another person with lustful thoughts toward them, it is as if we have committed adultery in our heart (Matthew 5:28). David went beyond that to commit fornication in the flesh, and adultery by sleeping with a woman who was already married, setting up a love triangle between himself, Bathsheba, and her husband Uriah.

This was particularly shameful as David had many wives and concubines, yet he defiled Uriah’s only wife. David’s sins began to snowball out of control, as idleness gave way to lust, coveting another man’s wife, and adultery. God’s anger over adultery is so intense that the laws He gave Moses demanded that both partners in adultery be put to death (Deuteronomy 22:22)

The apostle Paul writes that sexually immoral persons, idolaters and adulterers will not inherit the kingdom of God (1 Corinthians 6:9-10), making it clear that sexual sins are a form of idolatry, because they separate the sinner from fellowship with God and they elevate one’s own desires over the good of others. Thus, committing adultery becomes a form of apostasy, or rebellion against God Who imposes laws against fulfilling the desires of our sin nature.

We see this clearly with David, whose sin of adultery led not only to deception, but ultimately to murder, all of which are transgressions against God’s laws in the Ten Commandments (Deuteronomy 5:7-17-21). When Bathsheba got pregnant, David plotted to make Uriah think he was the father. He had his commander Joab send Uriah to David, and he asked Uriah to report on the progress of the battle (to cover his true motive for bring him home), and then ordered Uriah to go home to his wife while he was in town (2 Samuel 11:5-8).

This elaborate scheme was intended for Uriah to sleep with Bathsheba, so that when her pregnancy became obvious, everyone would assume Uriah was the father, and David would not be held responsible. But Uriah had far more honor, loyalty, and valor than David, for he could not choose the comforts of home while his fellow soldiers were camped out in the field.

When David questioned why Uriah did not go to his house, he replied “The ark, and Israel, and Judah, abide in tents; and my lord Joab, and the servants of my lord, are encamped in the open fields; shall I then go into mine house, to eat and to drink, and to lie with my wife? as thou livest, and as thy soul liveth, I will not do this thing (2 Samuel 11: 9-11).

So David tried again to lure Uriah into Bathsheba’s arms, plying him with liquor in hopes of making Uriah abandon his principles (Proverbs 20:1), but he could not. When Uriah had been in Jerusalem for three days, David wrote a letter to Joab, sent it with Uriah, and in it ordered Joab to position Uriah on the front lines of the hottest battle, withdraw support, and allow him to be fatally wounded  (2 Samuel 11:13-15).

Consequences, judgment and heartache always follow sin, as we shall see next week, but no sin is too great for God to forgive. Lest we follow David’s path, may we gird up the loins of [our] mind, be sober, and hope to the end for the grace that is to be brought unto [us] at the revelation of Jesus Christ (1 Peter 1:13).

Dear Laurie,
Of all sins committed by erring saints, no doubt that of King David was the most famous of them all, maybe because it was the most notorious. As you say, it was threefold - lust, adultery and murder.
Then again, Paul orders members of the church in Corinth to "Flee fornication" (1 Corinthians 6:18). For him to deliver such instructions, they must have been at it in the first place, that is, according to verses 15 and 16, church-goers were visiting a brothel on a Saturday night and maybe even getting high on alcohol too, before dressing up for church the following morning!
What a scandalous example of faith this must have been, especially to the unbelieving Jewish Pharisees, as well as other devoted Jews who were dwelling around them.
This could have been the reason why the apostles were so intense about personal holiness to be lived out by believers. There is this danger of putting the church into disrepute in the sight of all men to the extent that the grace of God is blasphemed.
And excellent post, and I look forward to its follow-up. God bless.

Dear Frank,
Thank you as always for your edifying and encouraging comments. I was surprised this morning that the pastor's sermon was on backsliding -- certainly that term could be applied to David, and to all believers at one time or another, because we are still plagued by our sin nature.
The world certainly does watch Christians closely to catch them in hypocrisy, and fornication or other flagrantly sinful behavior would give them good reason to disparage us. May we follow the Spirit's leading to remain holy and separate, so that we do not lose the power of our testimony. And when we do stray, may we ask for forgiveness so that He can restore us to usefulness once again.
God bless,
Laurie

Unfortunately many have used Paul's comments in Romans 7 as an excuse for staying in sin, ignoring what he said in Romans 6. While we may sometimes slip up, it should not become a way of life. As Romans 7:24-25 points out, victory can be obtained through Christ. We only stay in the sin because we choose not to escape.

So true, Donald -- God always provides an escape from temptation, and if we choose to remain in sin, it is of our own choice. May we quickly flee temptation, repent, and be restored.
God bless,
Laurie