The Just Ruler Has Wisdom, Empathy, and Discernment 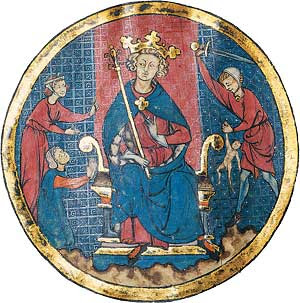 As we saw last week, King Solomon, the wisest man who ever lived (1 Kings 3:7-14; 4.29-32) epitomized the wise ruler who serves his family, people, and Lord. In addition to being king, and overseer of the Lord’s house who built His temple, Solomon also had to be judge over his people, deciding various disputes.

Scripture shows us one of his just decisions (1 Kings 3:16-28), demonstrating his wisdom, empathy, and discernment. Wisdom indicates not only book knowledge, but an emotional response to that knowledge leading to proper action.  There are three characters in the courtroom scene described: Solomon as judge, a harlot as plaintiff, and a second harlot as defendant.

Essentially, she claims the defendant is guilty of negligence, kidnapping, and deception. She says she realized what had happened when she tried to nurse the child, found that he was dead, and did not recognize him as the son she had delivered.  But the defendant not only denies these charges, but says that the reverse is true, implying that the first woman is the one who is guilty of these three crimes.

Knowledge of the facts is of limited help in this case, for there were no witnesses, no evidence (presumably the women were not of different race or distinguishing features that would indicate one to be the biological mother of the living child, and this was way before the days of DNA testing!), and contradictory testimony. Instead, Solomon must rely on discernment, accurately judging the character, veracity, and motivation of each woman. To do this, he must use empathy, placing himself in the sandals of the true mother, and how she would react to protect her child.

So he performs an acid test, seemingly resorting to extreme measures. He commands that a sword be given him and threatens to cut the child in two, to give half to each woman. In so doing he discerned the true motivation of each woman, for the biological mother would not allow her child to be harmed, for his welfare was far more important than her desire to raise him. But the other woman, motivated by grief for her dead son, envy of the woman whose child survived, and bitterness against the whole situation, was willing to have the child slain rather than let the true mother have him.

The true mother, whose emotions yearned to save her son, begged Solomon not to kill the infant, but to give him to the lying woman. In contrast, the liar said “Let it be neither mine nor thine, but divide it.” (v. 26). Solomon rightfully discerned that the woman who begged to save the child’s life was his true mother, commanded that the child not be harmed, and ordered that she be given the living child.

Interestingly, Scripture does not reveal whether it was the plaintiff or the defendant who was the true mother, perhaps because how or if we go about seeking conflict resolution is less important than the truth of the situation and our heart regarding it. In response to Solomon’s wise decision, Israel spread the news throughout the nation, realized that God had granted him true wisdom, and feared his judgment.

As Solomon built God’s temple according to His instructions (1 Kings 5), even now Jesus is designing mansions in His Father’s house (John 14:2) for each of His children! Unlike Solomon, however, who was subject to the curse of sin common to every man since Adam’s fall (Genesis 3:17-19), Jesus is without sin, omniscient, omnipotent, and omnipresent!

Praise God that all who have trusted in Christ’s death, burial and resurrection (1 Corinthians 15:1-4) as the only Way to Heaven (John 14:6) need not fear His second coming as King and Judge, for the Priest is also the Perfect Sacrifice (Hebrews 9:9-14) Who has reconciled sinful man (2 Corinthians 5:18) and Holy God! In the meantime, may we be blessed with His wisdom, knowledge and understanding! (Proverbs 2:6; 9:10; Isaiah 11:2)

Dear Laurie,
That is one of the most astonishing stories ever recorded, I would say not only in the Bible, but the whole of human history.
It has made me wonder about how many court cases could be far quicker resolved if this type of wisdom was applied today!
Then again, such wisdom can only come from God the Holy Spirit, the one of the Triune Persons of the Godhead who alone can discern the deepest secrets of man's heart.
An excellent post, God bless.

Dear Frank,
Amen -- our courts surely need Godly wisdom today! But, as the End Times draw nearer and spiritual wickedness in high places increases, we will no doubt see less, rather than more, true justice. May souls be saved so that His Spirit will prevail.
Thanks as always for your insightful comments. God bless,
Laurie

Sadly, our system is more concerned with following a set of rules than with finding out the truth, and they frequently change the rules to fit their own agenda.

Very true, Donald. Praise God that one day He will rule the earth with perfect justice and peace.

I really loved his post Laurie, great reminder of that story with Solomon. Besides remembering how wise he was, that story is the most memorable thing about him. It makes me wonder would I have been able to do what he did. I would be afraid I made the wrong decision. I would have had to take some time to pray to God to help me to pass righteous judgment. A story like that with the cutting the baby with the sword wouldn't get much of a serious response today because many would think he was joking, but back then in Solomon's days certain kings certainly would have done such a thing without even blinking, so we can understand the true mother's response. Lot's of people want to be wise like Solomon, I want to have the perfect mind of Christ.

Hi Sateigdra,
I'm blessed to hear that you enjoyed this post! Praise God for His indwelling Holy Spirit, Who will give us the right words and decisions at the perfect time if we yield to Him. Every believer has the perfect mind of Christ within us in the Person of the Holy Spirit, but often we fall short of using it, because every day is a battle between our old sin nature and the new creation who wants to follow the Spirit.

Thanks so much for your comment, and God bless!