Triplets of Christ-Mind: Be Faithful Even in Danger, for God Is Faithful 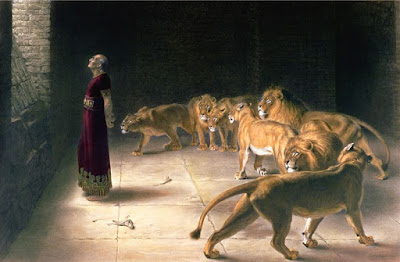 As we have seen in previous posts, fulfillment in our Christian walk requires knowledge, wisdom, and understanding. Knowledge refers to having learned God’s Word, or at least having an intellectual appreciation that Jesus Christ is the Son of God (John 1:1,14,18) Who came to earth in human form to be the perfect, sinless sacrifice to reconcile sinful man to Holy God (2 Corinthians 5:18). He rose again from the dead (1 Corinthians 15:1-4) to give all who trust in Him everlasting life (John 3:16).

Wisdom moves us from head knowledge to heart knowledge, as we realize His awesome power, justice and holiness and fear the Lord (Proverbs 9:10), knowing that we are sinners deserving eternal punishment in hell (Romans 6:23). But then, as we are born again (John 3:3-8), we experience relief that He paid the debt we could not (Philippians 4:7), and joy in our salvation (Psalm 35:9).

Too many Christians stop there, and do not gain understanding by applying God’s Word to their lives. But for those who show understanding by keeping His commandments (John 14:15), telling others about Him, and serving Him (Matthew 28:19-20), what happens when it becomes inconvenient, unpopular, or even dangerous to do so?

For a Godly answer to this question, we need look no further than Daniel, who, as we have seen before, exemplifies the triplets of Christ-mind. King Darius, who had taken the Chaldean kingdom from Belshazzar as Daniel had prophesied (Daniel 5:30-31), set up a brain trust led by Daniel as the chief of three presidents commanding 120 princes (Daniel 6:1-3).

The number 120 is interesting as it is 3 (God’s perfect number representing the Trinity) times 40, which generally symbolizes a period of testing, trial or waiting on the Lord. For example, Jesus was tempted by the devil for forty days in the desert (Luke 4:2); Moses lived forty years in Egypt and forty years in the desert (Exodus 24:18, 34:1-28) before God led him to set His people free; and Elijah traveled for 40 days to Mount Horeb to hear God’s plan for his future (1 Kings 19:8-19).

Given the nature of human politics, it is not surprising that the other presidents and 120 princes resented Daniel’s power over them, despite his excellent spirit, and that they plotted against him. They looked hard for “occasion against Daniel concerning the kingdom; but they could find none occasion nor fault; because “he was faithful, neither was there any error or fault found in him (Daniel 6:3-4).

They realized that the only way they could prove him disloyal to the kingdom was to make Daniel choose between his loyalty to the king and his obedience to God (Daniel 6:5). Extending their scheme to involve the king, presidents, governors, and the princes, counselors and captains, they convinced the king to issue a decree that anyone who prayed to any god or man other than the king for 30 days would be thrown into the lions’ den (Daniel 6:6-7).

Upon hearing the decree, did Daniel cave to political pressure, tremble in fear for his life, or defiantly rebel against the king? No, he just continued worshipping God as he had always done. He awaited confirmation that the decree was signed; he returned home; and he opened his windows toward Jerusalem. As was his habit three times a day, he kneeled, prayed, and gave thanks to God (Daniel 6:10).

Daniel’s enemies found him doing this, appeared before the king, and confronted him with how Daniel had broken the law by worshipping God three times a day. The king regretted his decision, desperately wanted to save Daniel, and worked all day trying to find an escape clause, but his officials would not hear of it (Daniel 6:11-15).

To avoid losing face, King Darius commanded them to capture Daniel, and he had him thrown into the lions’ den, but he spoke these words to him: Thy God whom thou servest continually, he will deliver thee. Amazing that a pagan king could utter such words of faith, hope, and encouragement! To make Daniel’s situation even more difficult, they found a large rock, set it across the den’s opening, and sealed the den shut (Daniel 6:16-17). This is a foreshadowing of Jesus Christ rising from the dead after three days in the sealed tomb.

All night, as the king wondered about Daniel’s fate, he fasted, refrained from listening to music, and stayed awake. Early in the morning he arose, hurried to the lions’ den, and cried out to Daniel. He called him servant of the living God, proclaimed that Daniel served God continuously, and asked if God was able to deliver Daniel from the lions (Daniel 6:18-20).

Daniel greeted the king reverently, and answered that God had sent his angel, who shut the lions’ mouths, and that they did not harm him. He explained that he was innocent before God and before the king, for he had done him no wrong. The king rejoiced for Daniel’s safety, commanded that he be released, and found him unharmed, “because he believed in his God” (Daniel 6:21-23).

Once again Scripture shows us salvation through faith, by God’s grace (Ephesians 2:8-10), with the proof of faith (in man’s eyes, for God knows our hearts regardless of our works) being obedience (James 2:14-26). Daniel was innocent not because he had never sinned (Romans 3:23), but because he trusted God, was faithful to obey Him no matter what consequences he might face, and was therefore righteous before God (Romans 4:6-22).

Those who had accused Daniel did not fare well, for the king commanded the capture and casting into the lions’ den of these men, their children and their wives. Just in case any scoffers might be wondering if these were emasculated lions who lacked the strength to attack Daniel, Scripture tells us that the lions broke all the bones of Daniel’s enemies before they even reached the bottom of the den! (Daniel 6:24).

God rewarded Daniel for His faithfulness by sparing His life, allowing him to prosper under the reign of King Darius, and even ensuring his long-term position under the next king, Cyrus the Persian. Even more amazing, God worked through this trial (Romans 8:28) in Daniel’s life to show His mighty power to King Darius, who in turn proclaimed it worldwide! To all people, nations, and languages throughout the earth, the king wrote, offered them peace, and issued a decree about the God of Daniel, the living God, Who is forever faithful (Daniel 6:25-26;28).

The king’s decree was for men throughout the kingdom to fear, respect, and recognize God for His indestructible kingdom, His eternal reign, and His mercy. The God Who delivered Daniel is a God Who delivers and rescues those who trust Him, as He performs miracles in heaven, in earth, and toward His people (Daniel 6:26-27).

May we have the understanding, faithfulness, and courage to follow Daniel’s example by trusting God’s Word and obeying Him, even when it is unpopular, politically incorrect, or life-threatening to do so. God will reward us richly by giving us abundant life, using us for His glory, and rewarding us in our eternal life with Him!

Posted by Laurie Collett at 7:08 AM

Dear Laurie,
I have always been intrigued by the story of Daniel and the den of lions. But what strikes me is that not only the opposing presidents were thrown into the den but their wives and children, literally ending the generational line of each of these men.
The thought of children suffering the punishment for their father's sins was something I have always found rather difficult to handle. I tend to think that they were very young, and had no idea of what their father's occupation was about, except a simple explanation from Mummy that "Daddy has gone to work. He'll be home tonight, sweetheart."
But the fact that they were presidents seem to indicate years of experience, and may themselves be elderly with grown up children, maybe even having grandchildren who were old enough (ie teenagers)to be fully familiar with their grandfather's business.
The only answer I can think of concerning this sorrowful episode was that the three presidents spilled their rage at home, winning their family's sympathy, and stirring their own rage against Daniel.
Also I believe that only the three presidents and their families were sentenced to the den. Assuming that each were a family of six, this would bring the death to eighteen people altogether, a fair number for the lions to devour "before they reached the bottom."
An excellent blog, God bless.

Dear Frank,
As I was studying Daniel 6 to write this blog post, I also wondered about the presidents and their families. I agree with you that it was most likely only the top 3 and their families, and I wondered why the wives and children were also put to death. Even if the families had not initially shared the presidents' hatred of Daniel, no doubt they would have hated him after their fathers' sentence, and perhaps plotted again to destroy him. In any event, God's ways and thoughts are higher than ours, and He must have had His reasons. Perhaps it is a warning that when you plot against God's anointed, it is not only you who suffers the consequences.
Thanks as always for your thought-provoking comment, and God bless,
Laurie

John 14:21 tells us, "He that hath my commandments, and keepeth them, he it is that loveth me: and he that loveth me shall be loved of my Father, and I will love him, and will manifest myself to him." Daniel knew the difference between what God commanded and what man said, and demonstrated his love by obeying God. He was blessed as a result. Far too many today do not understand that obedience is the demonstration of our love.

Amen, Donald! If we are saved, we love Him, and if we love Him, we will obey Him, even though we may fail on those occasions when our old sin nature gets the better of us and we fail to yield to the Spirit.
God bless,
Laurie

Beautiful post Laurie, I have often been encouraged by Daniel's story. Many times I, as I am sure others have too, gone through similar spiritual trials reflected in the book of Daniel and the Lord has strengthened me in those trials with what is written there. God's ways are not our ways and His guidance as we work out our salvation and have our minds renewed in Christ are enlightened by the Holy Spirit to each of us daily. I can truly say 'I love Thee O Lord my strength.'

Thank you, Brenda, for the kind words and for sharing your insights and experience. Praise God for His guidance, power, strength and wisdom imparted to believers through the indwelling Holy Spirit.
Love in Him,
Laurie