Triplets of Christ-Mind: Don’t Ignore God’s Handwriting on the Wall! 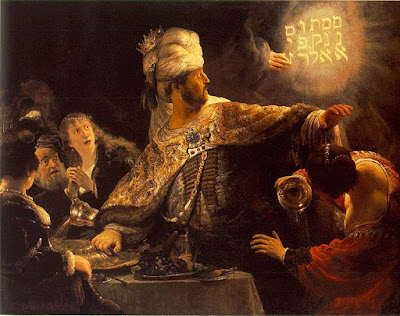 Daniel’s God-given wisdom allowed him to interpret three divine warnings for Babylonian kings: the dream of Nebuchadnezzar symbolizing three future kingdoms that would rule in his stead (Daniel 2:1-45); Nebuchadnezzar’s dream foretelling how God would humble him (Daniel 4:4-27), and God’s handwriting on the wall (Daniel 5:5-28).

This third warning interpreted by Daniel was one of three instances in Scripture where the hand of God actually wrote. The first time God used His finger to engrave the Ten Commandments on tablets of stone (Exodus 31:18; 32:15-16, 19; 34:1); the second time He wrote on the plaster of a stone wall in Belshazzar’s palace (Daniel 5), and the third time, Jesus traced unknown words in the sand as the Pharisees wanted Him to condemn the woman caught in adultery (John 8).

In the case of the handwriting on the wall at the royal banquet, it appears that the sins of the fathers were visited on the children (Exodus 34:7), for Belshazzar, the Chaldean king, desecrated the sacred gold and silver vessels his father Nebuchadnezzar had stolen from God’s temple in Jerusalem. Belshazzar allowed his princes, wives and concubines to join him in drinking wine from these holy vessels as they praised their pagan gods, made of valuable metals (gold, silver, and brass), or even of commonplace materials (iron,  wood, and stone; Daniel 5:1-4).

So we see even from the beginning of the chapter that the Chaldean rule was marred by three sins: theft, adultery (the king with his multiple wives and concubines), and idolatry, dishonoring God and honoring false gods. During this pagan revelry at the palace a disembodied hand appeared, writing on the plaster wall where it was illuminated by the candlestick, so that the king could clearly see it (v. 5).

The king was so troubled by this apparition that his fear was evident in his facial expression, his lower body losing power to support him upright, and his trembling knees (v. 6). He cried out for the astrologers, the Chaldeans, and the soothsayers (fortune tellers) to interpret the vision. Although he offered to whomever could do so scarlet robes, gold jewelry, and promotion to be the third ruler in the kingdom, none could read, let alone interpret, the foreign writing (v. 7-8).

Their failure caused Belshazzar to be greatly troubled, his facial expression to reveal even greater fear, and his lords to be astonished. The queen joined the king and his lords to offer the king three greetings: live forever; let not thy thoughts trouble thee, nor let thy countenance be changed (v. 9-10).

She recommends that the king consult Daniel, a man filled with light, understanding and wisdom, for in him was the spirit of the holy gods and the wisdom of the gods, and Nebuchadnezzar had given him rule over all the wise men (v. 11). She continues to praise Daniel for his excellent spirit, knowledge, and understanding, which enable him to interpret dreams, explain difficult sayings, and remove doubts.

Belshazzar’s queen was one of three women whom God placed in positions of power “for such a time as this” (Esther 4:14), using their influence over the ruler to accomplish His purposes. Queen Esther convinced Ahasuerus to spare the lives of the Jews (Esther 8), and Pilate’s wife warned him that she had had a dream convincing her that Jesus was innocent (Matthew 27:19).

King Belshazzar summons Daniel, repeating his queen’s words that he has light, understanding and excellent wisdom, and offering him the same three rewards that he offered the other wise men if he could interpret the writing. Daniel declines all rewards, but offers to read the foreign writing and interpret it for the king (Daniel 5:13-17).

Daniel explains that God had blessed Nebuchadnezzar’s kingdom with majesty, glory, and honor, causing all people, nations, and languages to fear, respect and obey him. But Nebuchadnezzar committed the sin of pride, thinking he himself was responsible and failing to realize that God deserved all the glory. God’s judgment was to depose him from the throne, strip him of his glory, and remove him from human society. His heart, dwelling place, and nourishment were like those of a wild beast until he recognized God’s power (v. 18-21).

Like so many others in Scripture (Ezekiel 18), in all recorded history, and in our own lives, Belshazzar tragically failed to learn from his father’s experience, wisdom, and understanding. He acted in pride, rebellion, and open defiance against God, worshiping dumb idols that could not see, hear, or know. Ultimately his father learned to be humble toward God, Who is Creator, Sustainer, and Guide, but Belshazzar had not learned this vital lesson and would now suffer the consequences (Daniel 5. 22-23).

Sadly, we see this pattern going back even to Adam, the first human father, and his rebellious son Cain (Genesis 4:1-16). Adam and Eve must have taught their children that God created them and provided for them, but that He had judged their sin. We can see from their son Abel that they taught their children to fear God, obey His commandments, and offer Him the first of the flock as a blood sacrifice. And yet Abel pridefully offered the fruit of his own labor, hated Abel because God was pleased with him and not with Cain, and ultimately murdered Abel.

Having shown Belshazzar his sins against God, Daniel read the foreign writing and interpreted it as a warning of God’s imminent judgment. The disembodied hand wrote three words (the first repeated for emphasis): Mene, Mene, Tekel, Upharsin, which Daniel interpreted as follows:
Mene: God hath numbered thy kingdom, and finished it.
Tekel: Thou art weighed in the balances, and art found wanting.
Peres: Thy kingdom is divided, and given to the Medes and Persians.   (v. 24-28)

To reward Daniel for his interpretation, Belshazzar clothed him with scarlet, put a gold chain around his neck, and proclaimed that he would be the third ruler in the kingdom. But as predicted, Belshazzar was murdered that very night, and Darius from Medes seized the Chaldean kingdom (v. 29-31).

Just as God engraved the Ten Commandments in stone to convey His judgment against all sinners, this second instance of God’s handwriting reveals His judgment against the king for the sins of pride, rebellion and idolatry. May it serve as a sober warning to all rulers who falsely think they obtained their power through their own merit instead of as a gift from God (James 1:17)

May we as a nation, especially all who are saved by placing our faith in the death, burial and resurrection of our Lord and Savior Jesus Christ (1 Corinthians 15:1-4), have wisdom to humble ourselves before God.  If we pray, and seek His face, and turn from our wicked ways, then He will hear from Heaven, forgive our sin, and heal our land (2 Chronicles 7:14).

Email ThisBlogThis!Share to TwitterShare to FacebookShare to Pinterest
Labels: 2 Chronicles 7:14, Daniel 5, Daniel and Belshazzar, God's handwriting, God's warning of judgment, handwriting on the wall, pray for our nation, sin of pride

Amen Laurie,
too many people, including some of those calling themselves 'believers in Christ' are worshiping the 'created' instead of the Creator in some church gatherings.
I love how Daniel chose not to eat the 'rich food' of the King. Much better to eat the 'manna from Heaven'.

Dear Laurie,
It was tragic that Belshazzar took the direction he did after witnessing everything which happened to his predecessor. But really, are our natural hearts any better?
That's why we need the Holy Spirit in our lives, as it is written:
"Kiss the Son, lest he be angry -" Psalm 2:12, and "not having the Spirit of Christ in him does not belong to him." (Romans 8:9).
The rather melancholic stories found in the Old Testament demonstrates the nature of the fallen heart which only the death, burial, and resurrection of Jesus Christ can renew.
An excellent post. God bless.

Amen, Brenda! So many churches today are taking their eyes off Christ, to the harm of the congregation. Even food can become an idol if it captures our attention away from the Bread of Life.
God bless,
Laurie

Dear Frank,
So true, that due to our sin nature, and especially pride, that we have such a hard time learning from our parents' experience. Without Christ, we have no hope. Praise God that Jesus rose from the dead to save us from our sins and give us eternal, abundant life.
Thank you as always for your insightful comment.
God bless,
Laurie
G

Hi Laurie,
just to say that I believe the spiritual meaning of the 'rich food' is something other than the plain and simple Word of God, which should be our daily food. I believe it is a 'food' that has mans' doctrine added.

Today, Christians in America seem to be in the same place Daniel was, warning of the consequences of sin. Like belshazzer, the people have heard the word and have no excuse, but even at this late stage they could still repent. Terrified as he was Belshazzar didn't repent and lost everything. I fear our country stands on the brink in similar way.

Good point, Brenda -- thanks for clarifying. God bless you.

Great point, Donald. May we as a nation heed His warnings before it is too late. It is amazing, and speaks to His infinite love, that His hand of mercy is still upon us, but for how long?
God bless,
Laurie

Thank you for taking time to share this with us Laurie. I remember the story of the writing on the wall in the book of Daniel.