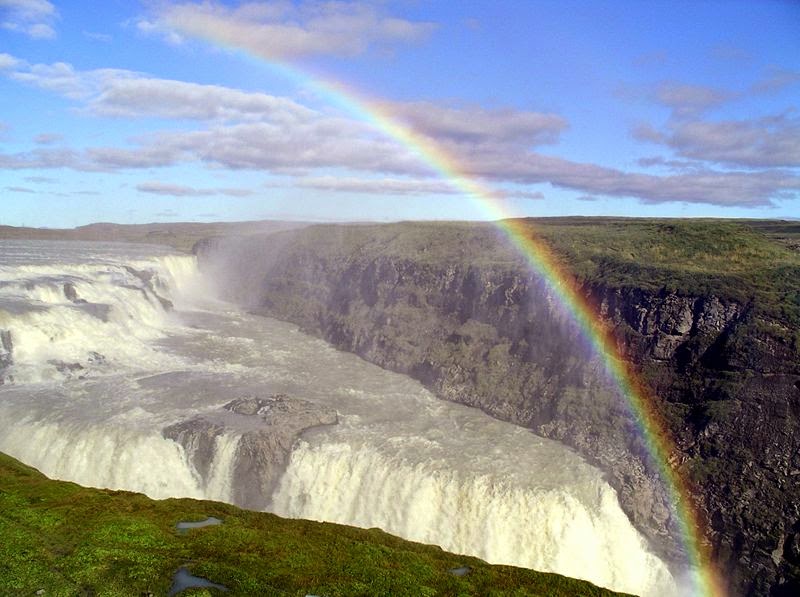 As we saw last week, flowing triplets of God’s love, light, and living water characterize His divine nature and bathe His children in His grace, holiness, and salvation.

God’s first recorded words were “Let there be light,” (Genesis 1:3). Light was and is essential to provide the energy to sustain all of His subsequent creation. Light and other forms of radiant energy flow continuously from the sun and other stars, traveling faster than anything in our known universe at the speed of 186,000 miles per second. Light travels in the form of a wave, much like waves we see in the ocean, but the frequency of the sine wave is so high that our eyes do not perceive the waveform.

Based on frequency, light can be divided into the visible spectrum, infrared radiation, and ultraviolet radiation. White light is composed of three primary colors: red, blue, and yellow, which when mixed together in pairs give rise to the secondary colors (purple, green, and orange). When we see a rainbow, the symbol of God’s promise never again to destroy the earth by flood (Genesis 9:13-16), we perceive it as having predominantly three bands corresponding to the primary colors.

Like matter, light and other forms of energy cannot be created or destroyed, because God spoke all that is into existence by the words of His mouth over the six days of His creation (Hebrews 11:3; John 1:3). However, Einstein’s famous equation involving only three terms showed us that energy and matter can be converted into one another. Energy equals matter times the speed of light squared, which is a number so large it is difficult to even imagine (448,900,000,000,000,000 in units of miles per hour).

Light on earth comes from the sun during the day, and from the moon and stars at night (Genesis 1:16), and all these praise the One Who made them (Psalm 148:3). God created these heavenly lights to give signs of His power, seasons varying in temperature and in earth’s growing cycles, and markers of time in days, months and years (Genesis 1:14).

God has used celestial lights for visible and prophetic signs of His majestic power, as in the sun standing still to aid Joshua in battle (Joshua 10:12-13), the blood moon to signify tribulation (Joel 2:31; Acts 2:20; Revelation 6:12), and the star directing the wise men to the Christ Child (Matthew 2:9). In the Great Tribulation, God’s judgment will be evident as the sun shall be darkened, and the moon shall not give her light, and the stars shall fall from heaven (Matthew 24:29).

The sun and moon illuminate the first heaven (Genesis 1:17)., or earth’s sky where birds fly; the stars brighten the second heaven of outer space, and Jesus Christ, the bright Morning Star (Revelation 22:16), lights up the third heaven where God the Father resides (2 Corinthians 12:2). The New Jerusalem will have no night, nor will it need the light of the sun or stars, for Christ Himself will be its eternal light (Isaiah 60:19; Revelation 21:23; 22:5).

The goodness, holiness and power of Jesus Christ, Who is the Light of the world (John 8:12; 9:5; 12:46), shine in and on the darkness of sin (Isaiah 9:2; 60:1) just as the sun lights up our planet. But His followers are also the light of the world (Matthew 5:14) and light in the world (Philippians 2:15), for His light shines through us and reflects from us like the moon reflects the sun’s brilliance. We share with the world the light of the glorious gospel of Christ (2 Corinthians 4:4).

John described Jesus as the True Light with life that was the light of men, and that shone in darkness; and that lit every man who came into the world (John 1:4-9). The transfiguration of Jesus, in which His inner circle of Peter. James and John witnessed the brilliance of His glory, was described as His face shining like the sun, His clothing white as the light, and the voice of His Father speaking from a bright cloud (Matthew 17 1-5). This glimpse of Christ in His glory reminds us that He is clothed in light, honor and majesty (Psalm 104:1-2).

Jesus called His followers the light of the world, comparing us to a candle elevated on a candlestick and illuminating all in the house, and telling us to let our light shine before men to God’s glory (Matthew 5:14-16). He told His apostles that while they had His light, they were to believe in the light, so that they would be the children of light (John 12:36).

Because God is light, we should walk in the light, as He is in the light (1 John 1:5-7). God’s Word is a light that shines in a dark place, until the day dawns, and the day star rises in our once darkened hearts (2 Peter 1:19).

Praise God that He is not only our light, but also our salvation and strength! (Psalm 27:1). He is our light in the darkness of evil, radiating His grace, compassion, and righteousness (Psalm 112:4). Once we place our faith in Christ’s death, burial and resurrection (1 Corinthians 15:1-4) as the only Way to Heaven (John 14:6), we have no need to fear, for we shall bask eternally in His perfect light! May His light shine through us! Posted by Laurie Collett at 8:21 AM

Lovely post Laurie,
and who would want to live in darkness, when we have the beautiful light of our Lord to guide us on our journey. There is only one winner when light and darkness come together.
God bless you Laurie.

Thank you, Brenda! Sadly, many do prefer darkness over light to "hide" their evil ways, but there is no hiding from God. Thankfully, a single candle can overcome the darkness of a large space, and His Light is victorious over all darkness.
God bless you too!
Laurie

Dear Laurie,
This is indeed a briliant, thought-provoking article. One point of interest that had drawn me to this subject if found in the book of Revelation, where in chapters 4 and 20 three distinct colours are associated with the Throne of God - white, as in chapter 20, red and green, as in chapter 4.
As I see them, the three colours represent God in his triple glory: White for Purity, green for Creator, and red for Redeemer.
By the way, you posted a magnificent photo scene of a waterfall. Do you know where it's located?
God bless.

Dear Frank,
Thank you so much for your kind words of encouragement. What an excellent point about the 3 colors in the Throne of God, and their symbolism.
The photo, courtesy of Wikimedia, is of Gullfoss Waterfall in Iceland. Looks like it would be an amazing place to visit!
God bless,
Laurie

I am constantly amazed at how often Einstein's proof is distorted. The formula for calculating amount of force required to stop a moving object or to accelerate a stationary one is e(energy or force) =m(mass) x v(velocity or speed) squared. what Einstein showed was that the velocity resulting from splitting atoms was equal to the speed of light, hence the energy released was equal to the mass of the particles times the square of the speed of light. In other words, there is always a fixed relationship between the size of the object and the amount of energy that will be released if it is vaporized. Unfortunately, many people interpret his theory of relativity to mean there are no fixed relationships. Einstein was thoroughly frustrated that people deliberately misinterpreted his theory to try to convince people that God did not create the world.

He believed that God had deliberately created the world in an organized and logical fashion, and that his proof supported such a conclusion.

Praise God, he did have a plan which did provide the light, the means of salvation, and everlasting life.

The study of numbers in the Bible is so very interesting. Years ago I read a book by Rev Lindsay of Christ for the Nations that was all about numbers and their meaning throughout the Bible. Your post on these three Love, Light, and Living Water is awesome.

Thank you for sharing your interesting post with us here at “Tell Me a Story."

Excellent point, Donald. Our understanding of science improves over time, but our increased knowledge always confirms God's Word, never disproves it. Einstein, clearly one of the most brilliant human minds ever, understood this and never doubted the existence of a divine Designer. Intelligent design is the only logical conclusion to draw from His creation. Thanks as always for sharing your insights, and God bless.
Laurie

Very true, Hazel -- all numbers in the Bible are of Divine significance -- seven as the number of Divine perfection, eight signifying new beginnings, six as the number of man, etc. Thank you so much for your very kind words of encouragement, and many blessings to you!
Laurie

You're very welcome, Hazel, and thanks so much for hosting!

Hi, im just blogger friend from mrs Denise Oldham...i saw on facebook that she has an heart operation...

here is the link
to her friend, so you can read
the details and pray for her
and her husband

im sorry i message thrue your comment box..but she also has many friends on blogger who dont now

friendly is you can pass this on i will be thankfull

(im sending this message to much people i can..)

So sorry to hear about Denise. Thanks for letting us know. God bless you both,
Laurie