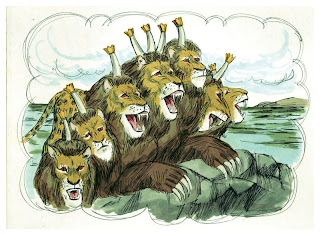 As we have seen in this series, God is a Triune Being encompassing Father, Son, and Holy Spirit. Satan, the great deceiver, will follow this template to convince those left behind at the Tribulation that he is the promised Messiah. His false trinity will consist of Satan, the Antichrist, and the False Prophet.

God sent His only begotten Son, Jesus Christ, wrapped in flesh to come to earth and to save mankind by being the perfect sacrifice for our sins. He paid our sin debt in full, so that whosoever believes in His death, burial and resurrection (1 Corinthians 15:1-50) will have eternal life with Him in Heaven (John 3:16).

To copy this pattern, Satan will bring the Antichrist into the world, who will at first appear to be a savior in that he promises to end global famine and to bring world peace (Daniel 8:23-27; 9:25-27). The Antichrist will mimic the miracles of Jesus by performing signs and wonders (2 Thessalonians 2:9) But three and a half years after the Antichrist signs a peace treaty with Israel, he will commit the “abomination of desolation (Matthew 24:15; Mark 13:14),” desecrating the altar of the rebuilt temple in Jerusalem and proclaiming that he is god (Daniel 8:11-13; 2 Thessalonians 2:3-4).

The Antichrist is referred to in Revelation 13 as the beast resembling a leopard, but with the feet of a bear and the mouth of a lion (v.2). His blasphemy against God has three targets: God’s Name, His tabernacle, and the saints in heaven (v.6), and he rises to power over all kindreds, and tongues, and nations (v.7). The Antichrist will parody the death, burial and resurrection of Jesus by suffering an apparently fatal wound, lying in a coma, and then miraculously returning to life (Revelation 13:3).

John contrasts the Holy Spirit, or the Spirit of God, with the spirit of antichrist. Any true believer in Christ is indwelled by the Holy Spirit and is not ashamed to proclaim that Jesus is God Who came to the earth in the form of human flesh (1 John 4:1-2). Conversely, any person indwelled by the spirit of antichrist will not admit that Christ is fully divine, yet fully human (1 John 4:3).

During the Tribulation, the False Prophet (Revelation 13:11-18) will play the dark counterpart to the Holy Spirit, drawing attention to the Antichrist just as the Holy Spirit leads hearts and minds to focus on Jesus Christ (John 16:13-14). The tools of his trade are speaking like a dragon, miraculous signs, and deception.

The False Prophet will appear to unite all remaining religions into a single, global, ecumenical system worshipping Antichrist as the false god (Revelation 17). He will lead many souls still alive in the Tribulation to be branded with the mark of the beast, or the Antichrist, namely “666” on their forehead or right hand. This number, composed of three sixes (the number of man) is described as the sum of three numbers: six hundred, threescore, and six (Revelation 13: 18).

People who accept the mark hail from three groups of men: small and great, rich and poor, free and bond (Revelation 13:16), Whoever refuses the mark of the beast cannot buy or sell in the new world order  (Revelation 13:16-18), but whoever accepts it is doomed forever – this is the point of no return regarding the possibility of salvation.

After Christ’s return and His defeat of Satan and his armies at the Battle of Armageddon, Satan has three more destinations (Revelation 20): bound in the bottomless pit for 1000 years (v. 3), loosed to deceive the nations and fight a final losing battle (v. 7-9), then cast into the lake of fire and brimstone forever with the beast and the false prophet (v. 10).

Much speculation has been written about the possible identity of the Antichrist and the False Prophet. Based on current events and Bible prophecy (Matthew 24),  we may indeed be caught up in the last throes or birth pangs (Romans 8 :22) of the Church Age before the Rapture, when believers are caught up in the air to meet Jesus Christ (1 Corinthians 15:51-53; 1 Thessalonians 4:16-17).

These two tribulation villains (Antichrist and the False Prophet) may already be prowling the earth, being groomed by their evil father to come to prominence once the restraining influence of the Church and the Holy Spirit indwelling believers is removed at the Rapture (2 Thessalonians 2:2-11).

But as Christians, we should not be anxious about the identity of the Antiichrist, because during our lives, we will never find out who he is. Instead, we should be looking up (Luke 21:28) for the blessed hope (Titus 2:13) of Christ’s return!

Posted by Laurie Collett at 5:23 PM