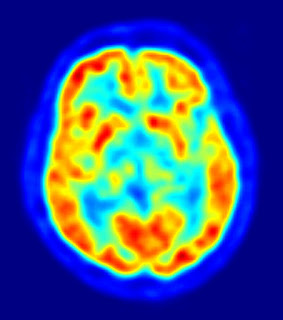 Not only did God create us in His image (Genesis 1:26), He designed us to know Him!

God is a three-part Being: Father, Son, and Holy Spirit, and we reflect that Trinity in our mind (soul), body, and spirit (1 Thessalonians 5:23). As amazing as it seems, the all-powerful, all-knowing, self-sufficient Creator designed us for His pleasure (Revelation 4:11), so that His children could have fellowship with Him (Acts 17: 24-28).

About a decade ago, evidence from the field of neuroscience began to reflect these Biblical truths, showing that brain function changes and intensifies during spiritual experiences. It is as if God hard-wired us to communicate with Him! The research used a specialized type of brain scan known as SPECT (single photon emission computerized tomography), in which injection of a radioactive tracer into a vein allows it to travel to brain cells, showing areas of increased and decreased neuronal activity and blood flow within the brain during a specific experience. The photo above shows a “slice” from front to back through the brain using a similar technology, with red indicating areas of most intense activity and blue indicating areas of reduced activity.

Dr. Andrew Newberg and colleagues (1) analyzed SPECT images of Franciscan nuns at the peak moment of their spiritual experience as they entered into deep meditation and prayer, which they later described as “a tangible sense of the closeness of God and a mingling with Him.” Dr. Newberg, who is considered a pioneer in this field of neurotheology, noted the similarities of their description to that of 13th-century Franciscan nun Angela of Folino: “How great is the mercy of the One Who realized this union…I possessed God so fully that I was no longer in my previous customary state but was led to find a peace in which I was united with God and was content with everything.”

To me, these descriptions echo Isaiah 26:3: Thou wilt keep him in perfect peace, whose mind is stayed on thee: because he trusteth in thee.

So what did the SPECT scans show at this moment of perfect peace through communion with God?

There was an intense burst of activity in the attention association area (prefrontal cortex), the area of the brain associated with attention and concentration, near the front of the brain beneath the forehead. At the same time, activity fell sharply in the orientation association area (posterior superior parietal lobe), the area associated with awareness of time and orientation of the body in space, located in the top rear portion of the brain. One of the main functions of the parietal lobe is to draw the boundary between the physical body and the surrounding external world. The SPECT scan data therefore suggest to me that the mind is highly focused and concentrated on God, while the sense of self practically disappears.

At the moment of salvation, the Holy Spirit indwells every believer, making us His temple and dwelling place (Acts 17: 24). If we seek Him with all our heart and soul through meditating on His Word and through prayer, we will find Him (Deuteronomy 4:29), “for in him we live, and move, and have our being” (Acts 17: 28). How awesome that He designed our brain with the circuitry to experience being “in Christ” and complete in Him! (Colossians 2: 6-9).


Stayed tuned next week for Part II of this post! God endowed His favorite creation with the neural circuitry, or hard-wiring, needed to fully appreciate and fellowship with Him!

Posted by Laurie Collett at 1:34 PM

Laurie, I knew the atheist, who told me that religion and spirituality is only question of genes and brain. But, if there is only question of genes - how explain the fact, that - as it told one of my Christian friend - nobody born as atheist. If it was only DNA, than atheists couldn't tell that their "religion" is better than our. Because I think that some kind of atheism is religion.
I also read a book about ancient civilisations, who knew True God, but during centuries their kings and authorities choose paganity. It is very interesting, that in all countries we can listen stories about the Flood or creating and falling of man.
Greetings for You :)

Thanks, Zim, for your interesting comment! Even atheists have "faith" -- every time they sit down in a chair they've never seen before and expect that it will hold their weight, or every time they step inside an airplane and expect that the pilot will fly it safely. I believe that God designed us to know Him, and so those who don't keep seeking to fill that empty feeling.
God bless you,
Laurie

Interesting, to say the least. I sure hope mine comes to light that way -- struggling with some neurological issues and the drs can't figure it out, just know it's a real problem. Oh, well. My FATHER knows and I can trust Him for the results. ONLY HIM!

Dear caryjo,
Thanks for your comment. I just said a prayer for you. Our Father knows all, loves us infinitely, and is the Great Physician.
Love in Him,
Laurie

Awesome, Laurie. I hopped over to Laura's and read the rest, too. The "perfect peace" verse is one of my favorites. Only one could have put the brain together so perfectly and that's my God!

I stopped over at Laura's to read the rest also :D

Thanks, Pamela! The more we learn about medicine and science, the more it testifies to His creative perfection!
God bless,
Laurie

Laurie - please stop by when you get a chance.

Hi Wendy,
Thanks so much for your visit and comment!
God bless,
Laurie

This is so interesting. I recently read Change Your Brain, Change Your Life by Daniel Amen. It discussed how our thoughts are reflected in brain activity. He also mentions that using Bible verses can calm the brain activity and produce peace. Great post. (visiting today from On Your Heart Tuesday. Nice to meet you.

Thanks, Gail for visiting and for your kind comment! I'll have to check out that book!
Blessings,
Laurie

Wow! I'm intrigued, heading over to finish reading now. Visiting from GMG link up. So nice to 'meet' you.

oh wow fascinating stuff...and it is all right there you know just waiting for us to find it...heading over now to finish the read...

Hi Lisa Maria,
Thanks so much for your visit & comment! Nice to "meet" you too!
God bless,
Laurie

Thanks, Brian! As science and knowledge advance, there will be more and more to discover about Him and how lovingly He created us!
Blessings,
Laurie

This is totally fascinating. I had no idea. Thank you for sharing.
Blessings,
Charlotte

Isn't God amazing. That is really something and very interesting. Thank you :) Have a fabulous day!

That is so beautiful. Thanks for your sweet visit.

Oh Laurie ... It is always such a joy when scientific discoveries backed up what we believers knew all along. That's thrilling!

Thanks so much, Cathy, for your kind comment and for following! may you have a blessed Memorial Day weekend!
Laurie

This is incredible, science backing up what the word of God says.

There are many skeptics in the scientific world, but the further advanced science research becomes, the more it proves God's existance and that He is the Creator.

Thank you for sharing this.

I think God smiles when humans discover things that He made!

Amen, Alecia, Joan, and Bettyl! Thank you so much for your comments and for sharing your insights. May you all have a blessed Memorial Day and great week in Him!
Laurie

Funny, I've just published a book, Hardwired: Finding the God You Already Know (Abingdon), which talks about how everyone has a sense for neurotheology.

Thanks so much for your comment, Jim, and congratulations on your book! I'll look forward to checking it out!